Cucumber Growing Season: Know When to Plant Cucumbers in Nigeria

A customer visited our farm some weeks ago and asked us if cucumber has a growing season. We told him clearly that there is nothing like cucumber growing season in Nigeria.

Cucumber can be grown in any season in Nigeria because of the tropical nature of our environment. However, it should be noted that cucumber may do better and yield more if planted in some months of the year. 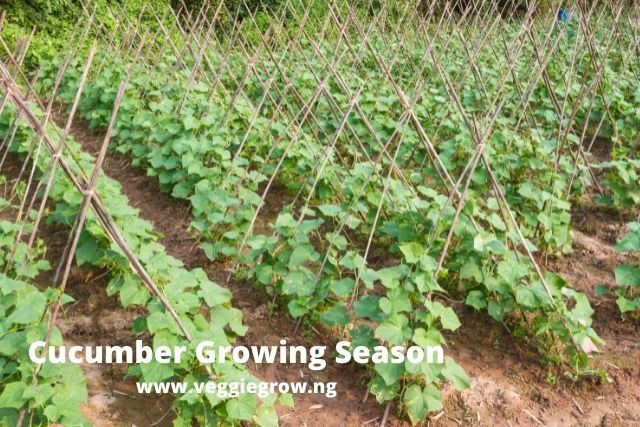 Nigeria has mainly two seasons namely the rainy season and the dry season. Cucumbers can be grown in these seasons.

The rainy season in Nigeria spans from April to October. During this time, the country receives a lot of rainfall.

A lot of cucumber farmers during this season do not use any irrigation because of the abundance of water.

However, cucumber farming in this season can be tricky. There are usually higher incidences of cucumber fungal diseases in the rainy season.

A fungal disease called downy mildew is common in this season. This disease can reduce the yield of cucumber to near zero. Downy mildew destroys the leaves and makes photosynthesis almost impossible; this eventually leads to very low yields.

During rainy season, leaching of nutrients from the soil is also very common. Fertilizers applied to the crops can be easily washed off during the rainy season. Cucumber farmers should ensure that fertilizers are buried when applied. Fertigation may also be used to avoid leaching.

In some areas, rainy season can come with flood. If your farm is inundated with water as a cucumber grower, you may not be able to harvest anything from your farm. Flood can cause root rots for your cucumber plants and can eventually lead to the death of the plants.

During the rainy season, cucumber growers may need to apply pesticides several times on their cucumber plants as rains tend to wash off applied pesticides on plants. This can lead to an increased cost outlay on pesticides.

One of the advantages of growing cucumbers in the dry season is the lesser incidences of fungal diseases. With this, cucumber farmers can spend less on fungicides.

Pesticides also stick well on the surface of cucumber plants’ leaves in the dry season because there is usually no rainfall to wash them away. This improves the efficacy of the pesticides.

Leaching hardly occurs in the dry season. Plants are able to efficiently use applied fertilizers.

Most cucumber farmers in Nigeria grow the crop in the dry season.

As explained earlier, cucumbers can grow in any season in Nigeria. However, every season has its peculiarities which a cucumber grower must know and prepare for.